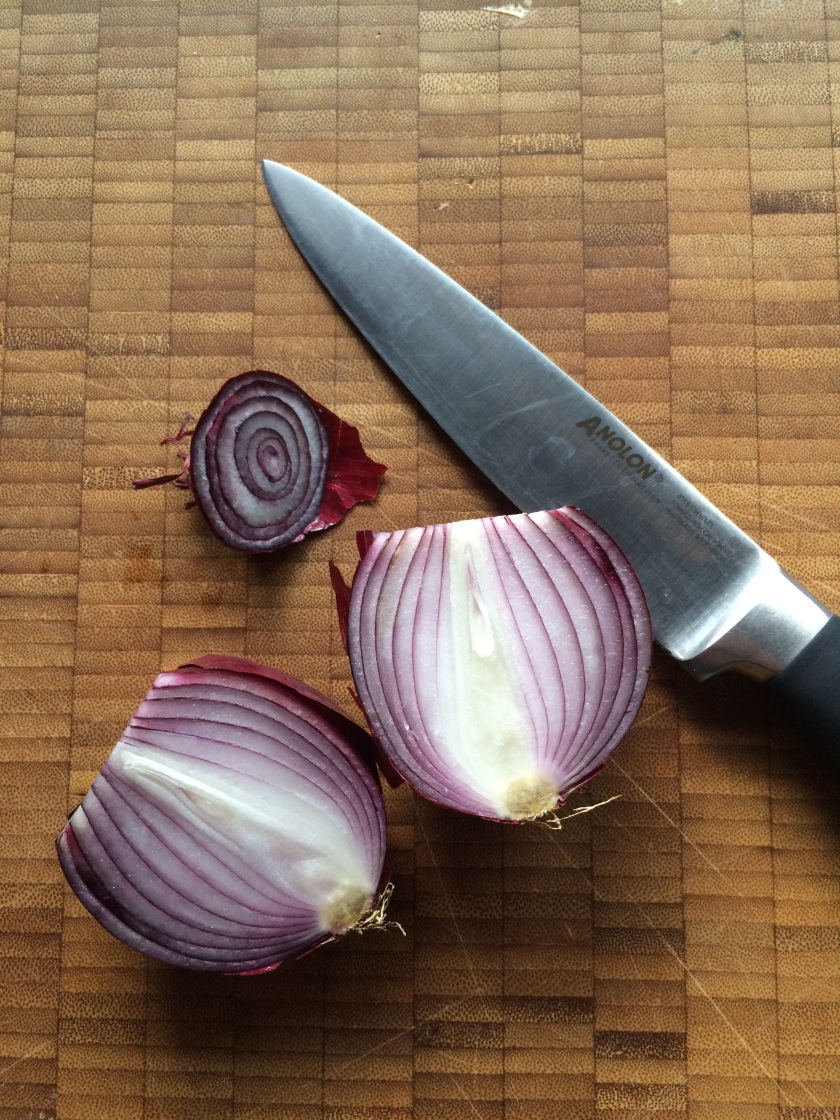 Do you have the issue that when you chop up onions they make you cry? I have been known to resort to wearing ski goggles to stop this happening. Tears stream down my eyes and I have to go outside for fresh air before I can finish chopping. I have tried sticking brown bread in my cheeks, burning a candle near by, having the window open but nothing really worked and white onions basically had to be avoided at all costs. The reason for our eyes watering is that when we cut into an onion, it releases a sulphuric acid that reacts with the moisture in our eyes and creates a burning sensation which in turn makes the eyes water. So to help in this situation, take your onion, and chop off the top, then cut in half but do not remove the bottom (the root) and just peel back the outer thicker skin. From here you can chop finely, in slices or how ever you wish and just do not take off the final roots till …

Ok so I know it isn’t quite yet December but that is what is so brilliant about this tip.. Make your mince pies now, then freeze them, you don’t even need to cook them yet. Put the pretty little pies in the freezer in their tray and once frozen, divide up into bags of two- four. Then during December you can be smug in the knowledge that at any dinner party you have, pudding is already in the freezer. Or even afternoon tea with some mulled wine, totally my favourite with some Christmas Carols in the background. With the mince pies, take them out of the freezer and pop them straight into a hot oven, around 180 degrees, for 15-20 minutes, checking after 15 mins as each oven varies with its speed of cooking (may take longer depending on how big you made your mince pies). Before serving sprinkle with caster sugar and serve with vanilla ice cream or brandy butter.

I know pulled pork sounds indulgent and naughty but it doesn’t have to be. My version uses apple juice and stock with a few spices, garlic and onion all cooked in the slow cooker for 5-6 hours till it is melt in the mouth. It has no added fat or sugar and can be served with the reduced cooking juices with a baked sweet potato or coleslaw made with yoghurt not mayonnaise. What is so brilliant about using a slow cooker is that by the time dinner is ready, you have almost forgotten about the fact you had to do some prep 6 hours earlier. Nothing easier than a bit of chopping, slicing and dicing and turning on a machine and popping out for the afternoon to be welcomed back home with wafts of pork goodness. I come back to this recipe time and time again, I think it is the gentle flavours and the fact one can eat it with almost anything using the pork as a base to so many other dishes. You … 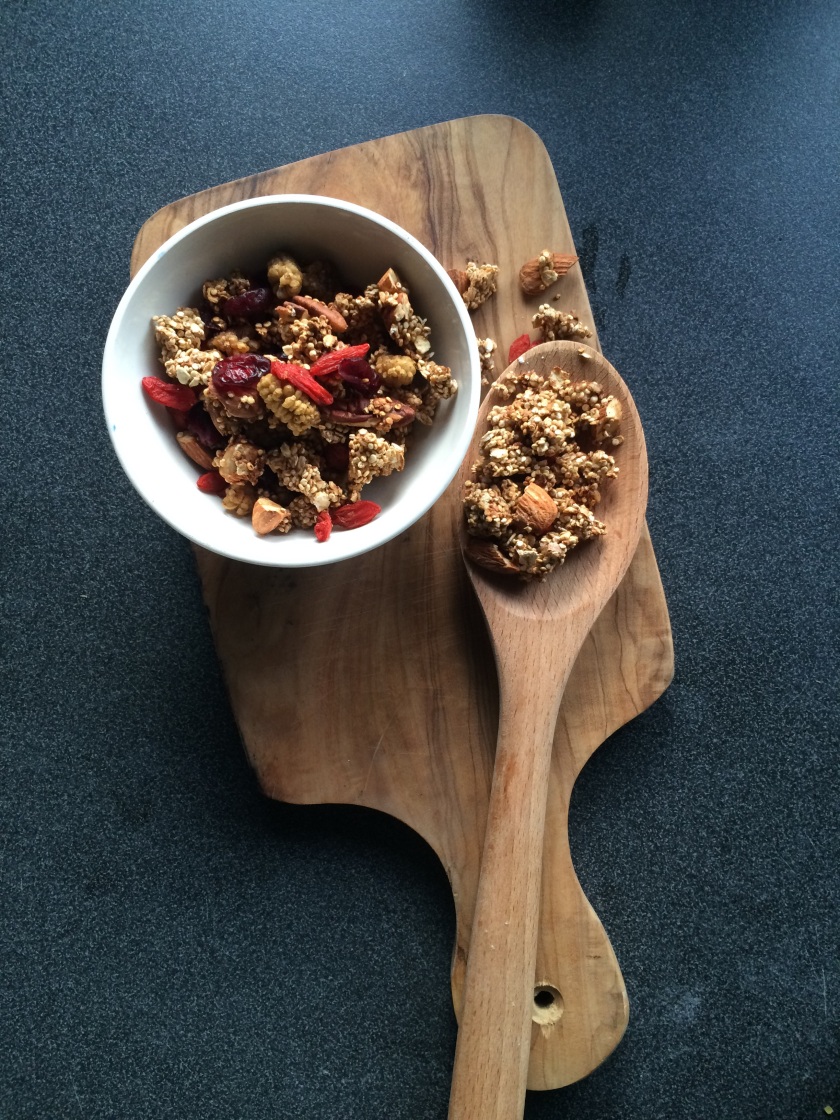 This is fat free and naturally sweetened granola with a really good crunch. Works well with milk as a breakfast cereal or my favourite is greek yoghurt with a little drizzle of honey. Ingredients: 200g quinoa 200g porridge oats 60g apple juice 3g cinnamon 30g honey pinch salt 75g nuts 75g dried fruit Line a large flat baking tray with baking parchment and set the oven to 140 degrees C. Put a large mixing bowl over a set of scales and measure each item in the bowl as per above measurements apart from the nuts and fruit. It is a really nice easy way of not having to use teaspoons, measuring jugs etc. Pour the mixture onto the baking sheet and put into the oven for 30 mins, checking after 15 and giving stir. In the same bowl as you measured the oats etc measure out the nuts and add to the mixture in the oven and bake for a further 15 minutes. Remove from the oven and add the fruit and give a good …

When I hear of a good tip, I am going to tell you them. Of course I will try them out myself first.. but this one is brilliant: When baking, roasting, cooking anything in the oven like granola, roast vegetables, salmon steaks – the list goes on.. line the base of the baking tray with baking parchment. Everything still crisps up nicely and the joyous bit is you can throw out the crispy, slightly stuck on bits of food straight into the bin and minimal washing up. Also it helps to make sure it is non stick – win win I say! OK so this isn’t brilliant for the environment I do hear you, but sometimes one doesn’t have enough time to scrub sticky bits off baking trays.

A really indulgent snack to go with pre dinner drinks, afternoon tea, lunch time soup and can also be frozen before cooking for any last minute guest arrivals. Buy some minced pork from the butcher (or use a pack of sausages and cut open and remove the meat) and put the meat into a bowl to add some seasoning. There are many combinations that work well and it’s slightly up to you what flavours you like, but here are a few of my favourites: Herbes de Provence with grated apple Toasted cumin seeds and caramelised onion Smoked paprika and bbq sauce topped with sesame seeds Normal pork sausage filling topped with toasted fennel seeds You will notice I often use cumin seeds in many of my recipes, basically I just like the flavouring and spice they add to certain dishes. Cumin seeds and fennel seeds are two of my favourites. Turn on your oven to 180 degrees and get out a baking tray. Ingredients for a simple sausage roll bite: One roll of puff pastry … 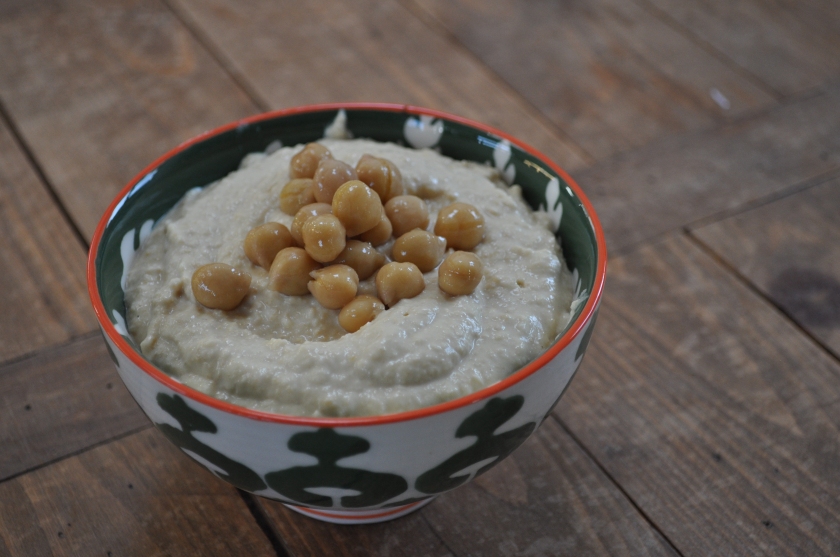 I always keep tins of chickpeas in the cupboard in case I do a last minute dinner or drinks at my house and need a quick snack / starter. What is brilliant about humous is that you can freeze it too. I also find it really useful to always have a lemon and a lime in the fridge. Lemons can be used in salad dressings to sharpen them so it won’t be wasted if you only use half for your humous. (Limes, well yes, in a G&T mainly) Ingredients: Juice of half a lemon 400g tin of chick peas 3 tbsp tahini iced water to thin Pinch salt Garlic clove Tsp toasted Cumin (Or any other additional flavour) Take all the ingredients apart from the water and blitz in a food processor, then add water just a small drizzle at a time while you have the food processor on till your humous is at the thickness you prefer. Add a further pinch of salt or more lemon to taste.  Other flavour combinations are: Roasted Red pepper … 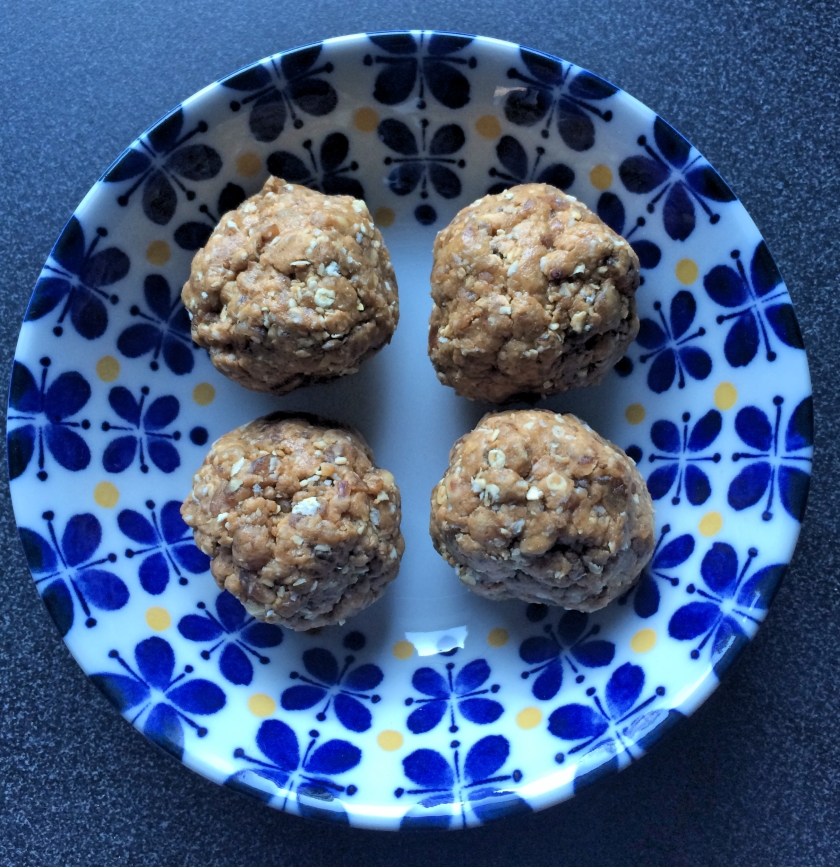 Sugar free goodies which provide a long lasting energy boost! At home, we are obsessed by peanut butter and anything sweet so this ticks both those boxes. We often suffer from a mid morning lack of energy especially if we have managed to get to the gym pre work so these help bring back our blood sugar level and keep us going till lunch. These can even be stored in the fridge for a week and you can take one out wrap it in cling film and take it in your hand bag. I am forever having to carry snacks for my husband. He suffers from hanger (angry due to hunger) frequently so if we have decided to do a big supermarket shop I need to ensure there are hanger avoidance measures at all times! I like to squidge these into a ball shape in my hands as I think they hold together best like this. There are also numerous ways you can add different flavours and textures to these amazing bites. I have recently … 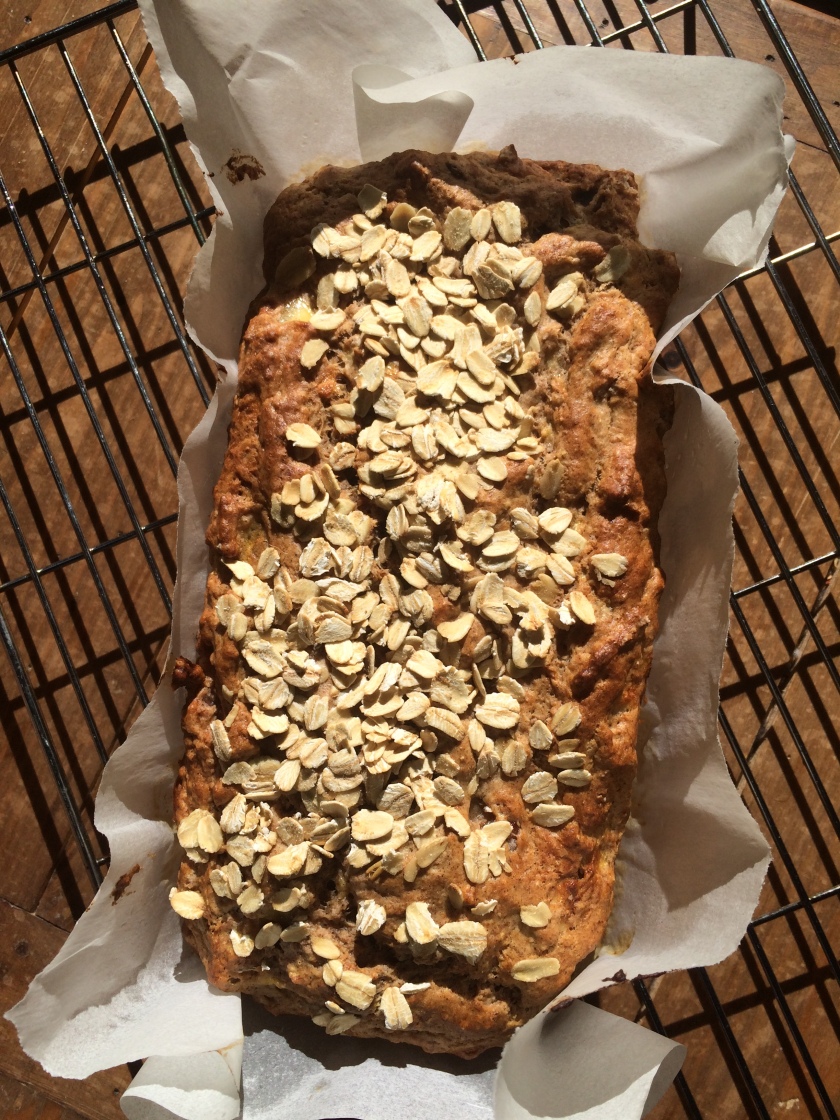 This has become a breakfast, tea time, afternoon snack favourite in our house hold. It can be smothered in peanut butter, honey, jam or eaten alone with a strong cup of coffee for breakfast when it is just that little bit too early and even making porridge is a little too stressful. The best bit about this recipe is that it is sugar free, so that obviously means guilt free goodness especially as there is fruit in here! The main sweetness comes from the dates and mashed up very ripe bananas. Gone are the days when I curse myself for leaving the bananas in the fruit bowl for too long. These are so full of natural sweetness they are an utter WIN in my opinion for any baking. Also, a recent discovery is that if you put your avocados, which never want to ripen, in the same bowl as the bananas they turn beautifully ripe in a couple of days. Ingredients: 130g wholemeal flour 1 tsp baking powder 85g pitted dates finely chopped 1 tsp …

This is my favourite time of year. The twinkling sun still shines and warms us while the chill of the winter wind reminds us what’s coming. The excitement of being wrapped up and cosy with large cups of tea and cake is looming. To look outside the trees turn from a bright green to hues of oranges and golden browns. One of my favourite things to do this time of year is crunch through the fallen leaves and kick them like I am a 7-year-old again. The produce at this time of year is bulging, oversized and full of colour. Pumpkins, butternut squash, berries, to name a few. This type of produce makes me turn almost completely vegetarian and I am a real meat eater. Here are a few of my recipes to try to fill you up and tick the comforting winter is coming feel. Pumpkin is my all time favourite, the deeply satisfying thick flesh is so versatile, it can be used in salads, stews, soups to name a few. It is also one …

I find blogging in the winter time a little tricky. Mostly because we eat a lot of comfort food,...

It has been a while since I have written. Life took a turn into chaos as we got a...

Well winter has definitely arrived and the Christmas adverts are on our tv so I can’t help myself...

It’s October, and I really hoped it might still feel like summer but with this ever changing weather (mostly...

WHOOPEE it’s the time of year when I get to drink copious amounts of red wine and do nothing...

It has been a while since I posted a blog, I have actually been travelling for the last month... 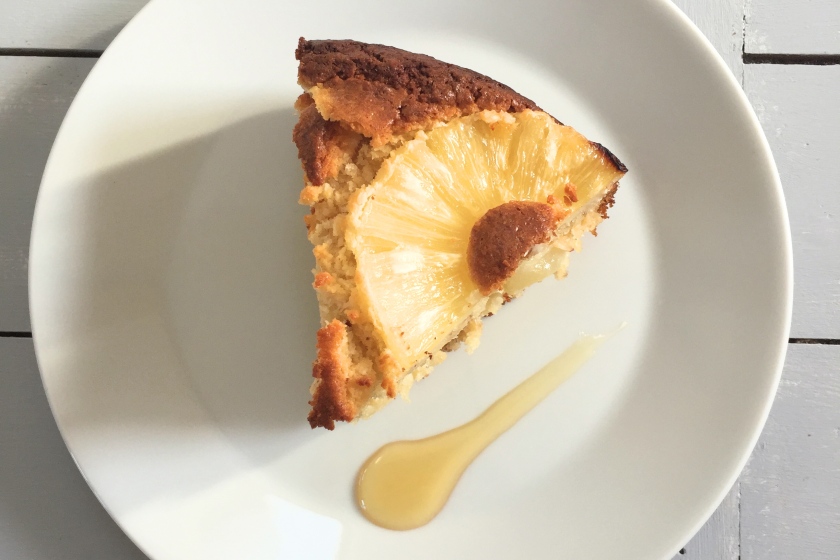 I’m supposed to be on a bikini diet, but so far I have baked 3 sweet things in the...

My husband is a big fan of American BBQ food, and to be honest so am I, but...

I have always wanted an ice cream maker, ice cream is one of my favourite summer treats. Many a...

When we eat, shouldn’t we always want to say “It’s delicious”?  My blog is all about good tasty food. Be... 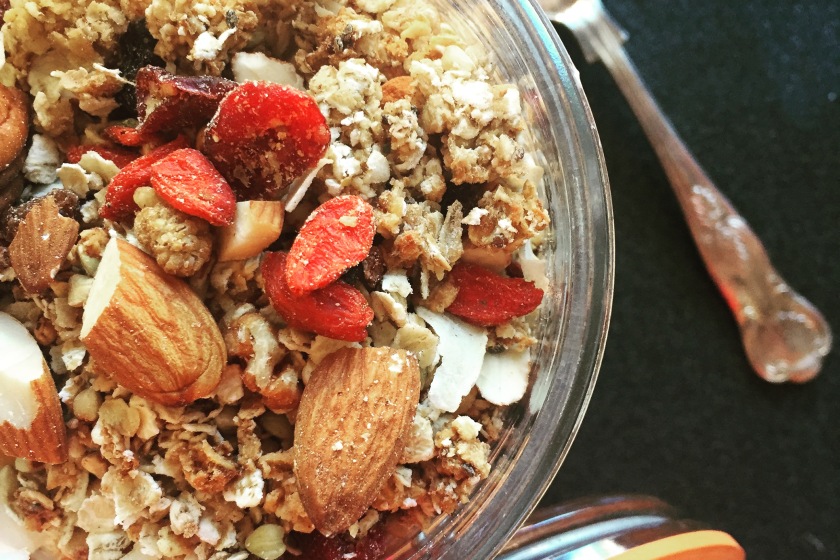 Granola is one of those items in the supermarket that I no longer buy. I have turned into a...

I found huge stalks of rhubarb in the supermarket the other day and have gone a little bonkers thinking...

I know these are all over the internet but I have never made them and wanted to see if they...

The glorious hot weather seems to have disappeared and lunches of cold salads and glasses of rosé feel inappropriate...